As Climate Changes, Southern States Will Suffer More Than Others 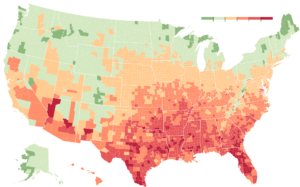 As the United States confronts global warming in the decades ahead, not all states will suffer equally. Maine may benefit from milder winters. Florida, by contrast, could face major losses, as deadly heat waves flare up in the summer and rising sea levels eat away at valuable coastal properties.

In a new study in the journal Science, researchers analyzed the economic harm that climate change could inflict on the United States in the coming century. They found that the impacts could prove highly unequal: states in the Northeast and West would fare relatively well, while parts of the Midwest and Southeast would be especially hard hit.

In all, the researchers estimate that the nation could face damages worth 0.7 percent of gross domestic product per year by the 2080s for every 1 degree Fahrenheit rise in global temperature. But that overall number obscures wide variations: The worst-hit counties — mainly in states that already have warm climates, like Arizona or Texas — could see losses worth 10 to 20 percent of G.D.P. or more if emissions continue to rise unchecked.