At parades and protests, GOP lawmakers get earful about health care 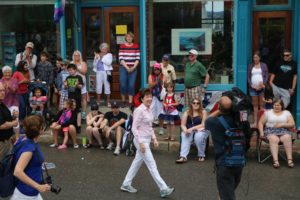 EASTPORT, Maine — For the 15th year, Sen. Susan Collins (R-Maine) spent July 4 marching through this town of 1,331, a short boat ride away from Canada. She walked and waved, next to marching bands and Shriner-driven lobster boats. Her constituents cheered — and then asked whether she would vote against repealing the Affordable Care Act.

“There was only one issue. That’s unusual. It’s usually a wide range of issues,” Collins said in an interview after the parade. “I heard, over and over again, encouragement for my stand against the current version of the Senate and House health-care bills. People were thanking me, over and over again. ‘Thank you, Susan!’ ‘Stay strong, Susan!’ ”

Collins, whose opposition to the Better Care Reconciliation Act helped derail last week’s plans for a quick vote, is being lobbied to smother it and make Congress start over. Republicans, who skipped the usual committee process in the hopes of passing a bill quickly, are spending the Fourth of July recess fending off protesters, low poll numbers and newspaper front pages that warn of shuttered hospitals and 22 million people being shunted off their insurance. It was a bill, Collins said, that she just couldn’t vote for.