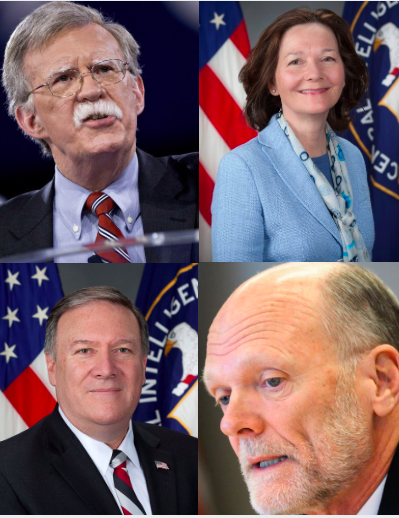 Washington, D.C. — Emgage Action, a leading issue advocacy organization for Muslim Americans, is disappointed by the Trump Administration’s continued nomination and appointment of known Islamophobes and supporters of torture to top national security and policy positions. We saw this with the appointment of Steve Bannon and Stephen Miller, who have done great harm to immigrants and refugees, especially those who are Muslim, Hispanic, or African. The President is now seeking to ram through yet another set of controversial figures by nominating Ken Isaacs to lead the International Organization for Migration (IOM), Mike Pompeo for Secretary of State, Gina Haspel for Director of the CIA, and appointing John Bolton as the National Security Advisor.

As we noted on February 8 of this year, Ken Isaacs cannot lead IOM when he believes that Christian refugees hold a higher priority over refugees of other faiths. Furthermore, Mr. Isaacs’ belief that the Quran instructs Muslims to commit acts of terror perpetuates the mischaracterization of Islam and emboldens far-right and neo-Nazi groups.

The nomination of Mike Pompeo to replace Rex Tillerson as Secretary of State is even more alarming. A personal friend to known anti-Islam hate group leaders Brigitte Gabriel and Frank Gaffney, Pompeo received ACT for America’s National Security Eagle Award in 2016. Mr. Pompeo is also on record endorsing torture and going so far as to refer to those implicated in it as “patriots.” The fact that an openly anti-Muslim individual was chosen to lead the CIA was troubling, but to have him nominated and potentially confirmed by the Senate to become our representative to the world is downright insulting.

Although the use of torture has been unequivocally denounced by both parties, this President wants to replace Pompeo with a proponent of the practice to lead the CIA. Gina Haspel directly supervised and carried out brutal interrogations in 2002 in secret prisons in Thailand, where prisoners were subjected to torture techniques such as waterboarding, physical assaults, sleep-deprivation, and solitary confinement. Haspel even attempted to destroy evidence about her involvement in the torture program by destroying cables and video surveillance.

Lastly, appointing former U.S. Ambassador to the UN John Bolton as National Security Advisor is perhaps the most dangerous of them all. Bolton has supported the Iraq war, encouraged military action against Iran, and preemptive strikes against North Korea, to name a few of his dangerous and misguided views. And just like many of the individuals tied to President Trump, he has personal ties to known anti-Muslim activists. He chairs the Gatestone Institute, a think-tank that dedicates itself to spreading hate about Muslims. Bolton even wrote the forward to a book by Robert Spencer and Pamela Geller, two of the most notorious anti-Muslim leaders.

Emgage Action CEO Wa’el Alzayat said, “We have witnessed yet again the Trump Administration put forward extremely questionable candidates to the highest ranks of our government, officials who have dubious track records when it comes to upholding human rights and embracing the diversity that defines the American identity. As a former career public servant, I am very troubled.”

The Trump Administration continues to appoint individuals who denigrate American ideals with their actions, commentary, and associations. We can do much better than rewarding them with these important positions.

Emgage Action mobilizes Muslim Americans to engage on local, state, and national issues in pursuit of a more equal, just, and prosperous society.

Visit emgageusa.org and emgageaction.org to learn more about how we are engaging politically to ensure that America continues to remain inclusive and tolerant for everyone.